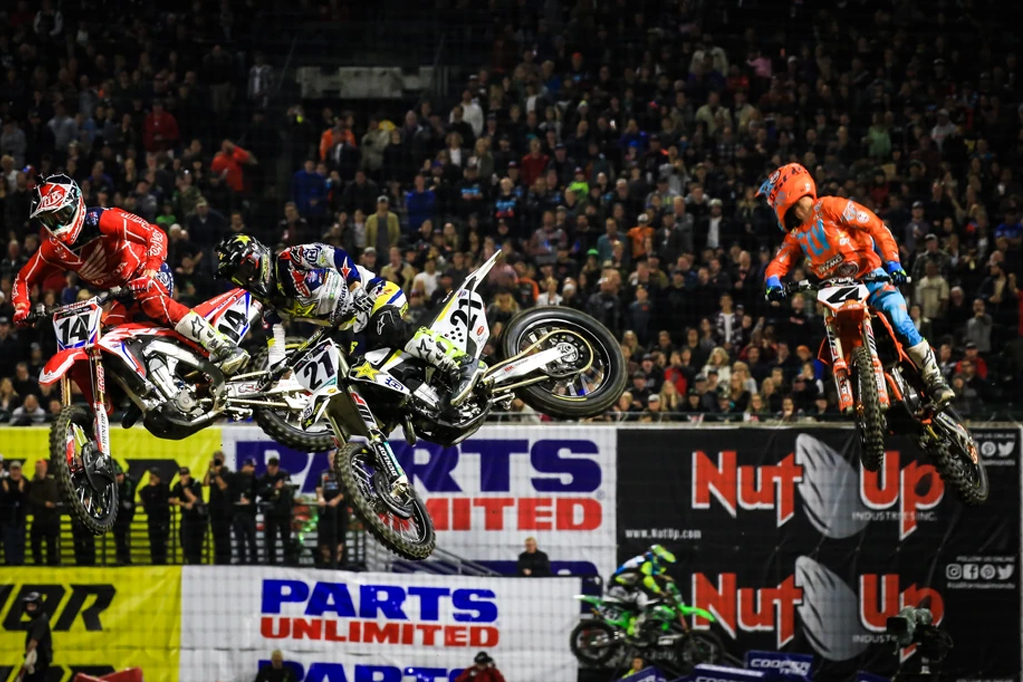 It’s the 2007 Motocross of Nations event at Budds Creek, and from the YouTube video, it looks like a sunny day.

One Greatest of All Time (GOAT) rider, Ricky Carmichael has come along for his final professional race in an incredible career.

A win would be the perfect ending to his career. No pressure.

Race 3 for the Open + MX1. The final race of the day for the 2007 Motocross of Nations winning place. Thirty-two riders line up at the starting line.

On the first corner, Carmichael takes the lead, and with a bop, bop, bop goes roaring into the air and commences his dominant ride over the dirt mounds of the track to take first place.

With style and confidence, Carmichael performs the perfect sign off on a legendary career in motocross racing.

The voice of the commentator is twinged with emotion as he follows the GOAT over the finish line.

Why am I writing about this now? Because I’ve found a four-hour special interview with Ricky Carmichael and the advice feels so accessible.

No fancy tech software is required, no bank-breaking degree at a leading business school — just human endeavour and dedication.

Any leader in their field will have a combination of insights and lessons gleaned that carried them on their journey of success. Having heard many of the old Tony Robbins and Seth Godin tales, I’m interested in hearing stories from other quarters.

When we’re all busy applying the same tactics from a couple of voices in a narrow field of expertise, we are limiting our vision of the world.

I’ve been guided to a four-hour special interview on the Whiskey Throttle Show On YouTube with the Greatest of All Time (GOAT) motocross rider Ricky Carmichael.

Any intro from me can’t do Carmichael justice so I’ll leave you with a link to his website and scatter my discoveries through the blog.

The show is excellent, and Ricky’s insights and strategies that drove him forward onto his brilliant career feel strangely resonant.

Here goes with my favourite five insights from the Whiskey Throttle Show hosted by David Pingree and Grant Langston.

INSIGHT 1: IT’S NO FUN AT THE BOTTOM

Ricky says a couple of times throughout the show that he did not enjoy being on the bike until he was a pro. That’s 67 amateur championships before going pro in 1997. That is a long period of grafting.

On the show they talk about the rain, the mud, the practising every single weekend while other kids their age were enjoying themselves messing about.

He states this position calmly; without regret. He didn’t enjoy riding until he became pro.

That’s one thing that separates a champion from the rest of us; endurance and pushing through the pain barrier, which, with motorbike racing is going to be a lot higher than someone sitting at home tapping away on a keyboard.

It was interesting to hear that because as a writer or any creative, we’re always going on about enjoying the craft and it is fun. Though the rejection isn’t fun, and that feeling of being lost isn’t fun and being in a competitive space isn’t always fun.

We, writers are often so busy avoiding pain and rejection and looking for easy options, and the expectation can be that it should be enjoyable.

Love what you do, and that’s half the battle but no — perhaps the struggle comes first, and the love is the reward for sticking with it.

INSIGHT 2: THERE’S NO SUCH THING AS MAGIC

Talking specifically here about his time with the group coach Mitch Payton, who used to smell the team’s fingers to make sure they hadn’t been eating fries. Brave man.

He said he figured out early on that the game was all about self-accountability.

Whether or not you have a coach or mentor driving you on, that first accountability buddy needs to be you.

Throughout the conversation, this came up time and time again.

Accountability is a critical ingredient.

Accountability was what got him on a physical training programme that enabled him to be a champion. Responsibility was what pushed him on after a bad year.

It’s such great advice and comforting reassurance. Everything starts with you, and if you can’t be accountable to yourself it’s going to be a hard ride, no matter who else you have around you.

Hands off that brioche and Cannes here I come. I’ve only got myself to turn to. I like it.

Contrary to so much advice from mentors and coaches about visualisation of success, Ricky continuously said that he raced with a fear of failure snapping at his heels.

He admitted it went against most advice in the sports psychology era, but that this was one of his overwhelming mantras.

He said that the repercussions of thinking you were going to win and being disproven were much more shattering than getting comfortable with fear being a part of your strategy.

I wonder how this works in business? We’re told to be confident and believe in ourselves when driving our services but is this causing us to be complacent? Entitled? Is it a sense of entitlement to assume that we don’t need to be fearful.

And what happens when we do lose? Are we setting ourselves back beyond where we would have been had we accepted a guiding hand from the fear of failure?

Ricky’s mother, Jeanie, was a prominent figure in the conversations. She drove a high level of expectation with a cool hand by the sounds of it. While she elicited respect from Ricky, she seems to have had a different effect on each of the guys on the show.

David was terrified of her, but Grant had another story of being consoled by her after a race catastrophe.

Fair dues super mother! She drove Ricky to the track to practice every weekend and made considerable sacrifices to support his career.

He didn’t say that he never made the same mistake twice, but it was a rule he strived to enforce and the process of allowing for one and scooping up the lessons to drive an improved growth trajectory proved fruitful.

Would this serve us better in business or art than a rigid attempt to avoid all failure? Toeing the line all of the time is not to push yourself but consistently making the same mistakes is another folly.

Is the balance in saving your self beating for the second mistake and being open to the first the trick to continuous learning? Let’s face it; most of the errors non-riders make will break no bones.

By the way he interacted with his old competitor Grant Langston one thing was clear. Ricky is cool; not easily flustered, never pushed into a place where he’d do or say something he regretted.

He put this all down to respect — the simple act of treating others how you want to be treated yourself.

In a competitive environment, many of us could and do succumb to existing in our own little bubble and saving our effort for ourselves. Still, perhaps the real champions put as much effort into helping others, or at least treating them with kindness as they do their own needs?

And finally, he talks about the legacy that wants to leave, which was, that he gave it his best for every race, every appearance. Every move that a spectator saw he wanted them to know that he gave it all for his craft.

I hope you enjoyed this and if you are a biker that I haven’t snow-flaked all over your sport.

I hope these insights inspire you to be more than a passenger in life and to own the drive.

Sign up with your email address to receive news and updates.

This website uses cookies to improve your experience. We'll assume you're ok with this, but you can opt-out if you wish. Accept Read More
Manage consent

This website uses cookies to improve your experience while you navigate through the website. Out of these, the cookies that are categorized as necessary are stored on your browser as they are essential for the working of basic functionalities of the website. We also use third-party cookies that help us analyze and understand how you use this website. These cookies will be stored in your browser only with your consent. You also have the option to opt-out of these cookies. But opting out of some of these cookies may affect your browsing experience.
Necessary Always Enabled
Necessary cookies are absolutely essential for the website to function properly. These cookies ensure basic functionalities and security features of the website, anonymously.
Functional
Functional cookies help to perform certain functionalities like sharing the content of the website on social media platforms, collect feedbacks, and other third-party features.
Performance
Performance cookies are used to understand and analyze the key performance indexes of the website which helps in delivering a better user experience for the visitors.
Analytics
Analytical cookies are used to understand how visitors interact with the website. These cookies help provide information on metrics the number of visitors, bounce rate, traffic source, etc.
Advertisement
Advertisement cookies are used to provide visitors with relevant ads and marketing campaigns. These cookies track visitors across websites and collect information to provide customized ads.
Others
Other uncategorized cookies are those that are being analyzed and have not been classified into a category as yet.
SAVE & ACCEPT